Asian longhorn beetle, Anoplophora glabripennis, is a serious invasive pest that is found in East Asia.  Asian longhorn beetles and the closely related Citrus longhorn beetle can infest a very wide range of broadleaved trees and would be a major threat to horticulture and the wider environment if they became established. 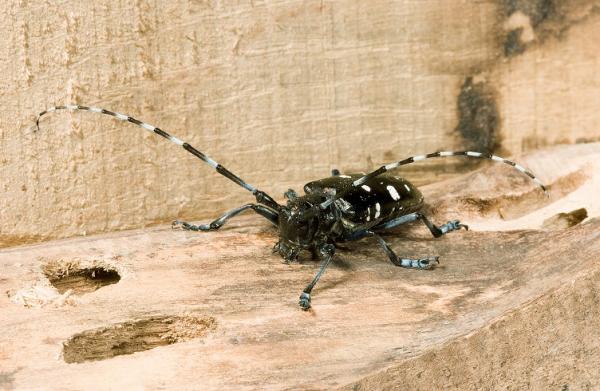 Larvae of the beetles cause the most significant damage by feeding undetected on the inside of a host. In addition to the direct damage from the pest it can also leave a host weakened and susceptible to further pest and disease damage.

Movement out of its native range is often associated with international trade. Trees that contain the beetle are cut down and processed into wooden pallets without killing the larvae. If those pallets are not then properly heat treated, or additional untreated infested wood is subsequently added to secure a cargo in transit, ALB can emerge and attack nearby trees at their destination. The beetle has been introduced to Europe and North America with the movement of wooden pallets, particularly those used to ship stone from China which originates from a region where the pest is very common.

The beetle has been intercepted a number of times in the UK at points of entry by plant health officials and in the wider environment following reports from members of the public. These findings are usually single beetles associated with imports of products in wood packaging material for example stone from China. Following one such finding in 2009, a follow up survey by Forest Research led to the discovery of what to date remains the only known established outbreak of the pest in the UK in the Paddock Wood area of Kent.